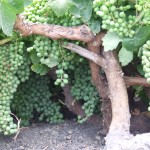 Unlike Europe, in Cape Verde, or rather in Fogo, harvesting begins in early July and lasts until early September.
The cultivation of lasted more than a hundred years, which was introduced by the Portuguese with native varieties that have become both white grapes than red, plants, protected by small stone walls of volcanic rock, are covered with bush, to protect the wind that often blows hard inside the volcano.
The peculiarity of this crop is located inside the caldera of the volcano more than 1700 meters above sea level and is not irrigated except at night or moisture from the little rain during the summer. 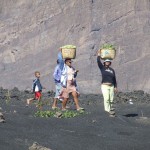 Large bunches sweet collected from the entire population and brought in baskets on their heads (women) or donkey are sold in the market of São Filipe, while a large percentage shall be increased to the cellars (“Cha” inside the volcano in the village of Portela and “Sodade” out of the volcano at Achada Grande) for the production of the famous Fogo wine, appreciated by all tourists who partake in the local restaurants, then every manufacturer maintains a quantity of grapes to make wine at home the traditional local the Manecom, to drink with family or friends.
As for the coffee, the limited production does not allow the export of the product, which must be consumed in “our land.” 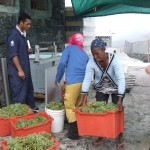 Italian cooperation in recent years has led to centuries of experience that has allowed local producers to improve an already good wine and start new production such as grappa (distilled from grape wine), the raisin wine and liqueurs from herbs.
Excellent souvenirs for tourists.